AS 2016 draws to a close and we reflect on the turbulent year it has been on the political and celebrity bereavement front, the world of improv has been plowing away both in the limelight and behind the scenes around the world. I’ve been looking back over my reflective journal to once again comprise my list of my improv related highlights of my year. 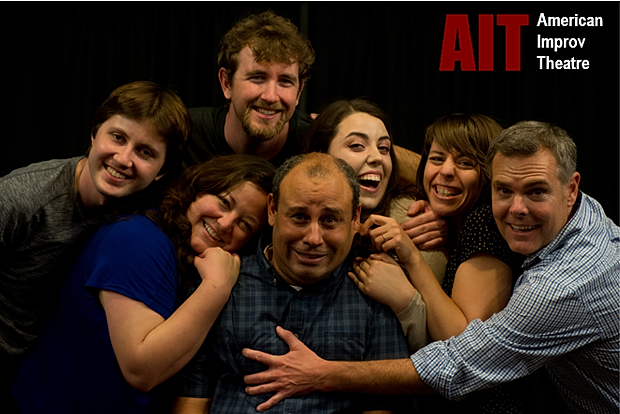 I’m a regular visitor to the Bay Area in California and I was delighted to see that San Jose has its own festival with 2016 being its first year. Hosted by the American Improv Theatre, the weekend festival featured a number of teachers and performers from California and beyond. Oh and me too! I was thrilled to be accepted and taught my “You’re Doing It Wrong!” class as well as performing Neil+1. I love teaching that workshop as I wanted people to step out of the shadows and celebrate all the things that get us in our head or that we feel contribute to bad improv. Its all nonsense. There is no wrong way to improvise right? Just methods that make it easier or harder.

One stand out show of the festival for me was “Liss N’ Sams” featuring Joe Liss and Marcus Sams. A high energy polished set, the performers made it look so effortless. Lots of physicality and great intertwined scenes.

Susan came back and she brought reinforcements! Susan and Rachael are icons in the improv scene and for good reason. They fill workshops all around the world and their experience with improv goes back a long way. One of my improv goals was to one day have Susan come teach some meaty in Ireland. (At the time I didn’t know Rachael!) While I managed to have her tease us with a short workshop in 2015, July 2016 would see that goal attained! It was no easy feat but it came together in the end. Two intense days with two improv powerhouses. It was a joy! Their energy, their positivity and their insight into the art form touched the group. You would need an assigned notetaker to write down the wisdom they impart to catch it all during a class. Given they were in Dublin, I couldn’t resist the opportunity to have them take part in one of our “Love! Improv” Jams. This weekend will remain a highlight no doubt in the years the come!

I already posted earlier in the year about my experience at this year’s West camp when I was Counsellor for Cousteau Cabin. You can read about that here. In August however, I attended the inaugural Yosemite Camp. The Yosemite Improv experience is different than East and West. You spend the whole duration with 1 teacher, usually working on one format or area. Yosemite sold out in no time. It didn’t need to be advertised. (Kudos to the Improv Utopia team for creating such a community where its popularity is matched by its integrity) But Yosemite featured so many great teachers. Craig Cackowski, Karen Graci, Paul Vaillancourt and Brian James O’Connell (“BOC”). I chose to work with BOC for 2 reasons. 1. I love the Deconstruction (Decon) and no better person to learn it from. 2. BOC’s style and coaching really hits me where I need it. Brian worked us hard with the Decon and skilfully maintained the fine art of keeping us progressing while not having us becoming complacent. Brian is the fourth improv teacher I’ve trained under on the Decon and it wasnt really until I worked with him that things came together in a way I was happy with. (That’s not a negative comment about the other teachers I’ve trained under, more a comment on my learning style.) I’ve very grateful for what things I’ve learned both as a performer and a person from BOC.

August also saw me travel in to the spiritual home of Hogwarts to Keble College in Oxford. The Applied Improvisation Network is a network of improvisers from all over the world who use the principles of improv and theatre for a non theatrical such as in the corporate world, science, etc. They hold an annual conference and I was invited to perform Neil+1 at this year’s event. While I was honoured to be invited, I was equally a little bit terrified. After all, the audience would be massive and the attendees would be likely be improvisers in some shape or form. However I grasped the words Susan Messing once told me, “Don’t fuck this up Curran” and put on a show that seemed to be well received. It was another moment with the show where what developed became food for thought for both my +1, Trude from Norway, and myself. Trude was fantastic to perform with. We chatted for some time after the show about her experience and it was interesting to hear how the experience went for her on a deeper level. Its moments like this that remind you how truly powerful this art form is and how it can touch our lives. I was very grateful for the opportunity to perform courtesy of Paul and the team.

The latter half of the year was largely dominated by four festivals. In chronological order, Slapdash (London), BIGIF (Barcelona), Improv Fest Ireland and Improfest (Krakow). (I have written some afterthoughts from Improv Fest Ireland already here.) For a period of about 6 weeks, I had gone festival mad. I was teaching in all bar Ireland, and performing at each one.

Slapdash is lots of fun. The team behind it are all workhorses when it comes to Improv and London always feels like the equivalent of popping in for the neighbourly friend for some tea. The festival did not disappoint. I was particularly fond of being part of the ‘Teacher Jam’ show on the penultimate night, where a small few of the teachers plucked improvisers from the audience to play on stage with. I always have mixed feelings about mixer shows (ironic given I perform with strangers all the time with Neil+1!) but this show was a pleasure!

The BIGIF is exactly that. A massive improv festival in one of Europe’s coolest cities with performers from the world over. This year’s theatre was fantastic. Three tiered auditorium and packed to the brim each night. The Neil+1 show I performed this year was one of the most touching shows I have performed. I was genuinely moved by the narrative that unfolded and the performance from my +1. (Bear in mind my +1 Thomas, was not an improviser or actor!) I’ve posted a video of the performance below.

After Improv Fest Ireland I journeyed to Krakow for Improfest. This was exciting in many ways. I’d never been to Poland before and I had no idea what to expect. The festival was massive, the improv scene in Poland is huge. There are Polish speaking groups all over the country. There was between 400 and 500 audience members every night. A stage and lighting rig had been constructed, it was like being at an indoor rock concert. Some acts had a full live band (including the Teacher Show where I performed with Jim Libby and Rod Ben Zeev. The festival hospitality was world class. I was deeply humbled by how far the festival team went to ensure everything was going well for their guests.

I had an interesting Neil+1 show at this festival. The gentleman who joined me on stage was a bit of a character. A topic arose during the show which I won’t get into here and I had to handle it as both a performer and a human being. I’m pleased with the choice that was made, and some comments from the audience afterward assured me that it was a strong choice. My +1 had a ball and really brought an interesting edge to the show.

Unfortunately the festival doesn’t’t operate on an application basis but if the opportunity comes up, I highly recommend it. Much thanks and love go out to Alan, Iza, Hania and the team for the hospitality, fun and wonderful experience.

The Dublin improv scene is continuing to grow rapidly and the weekly improv night, Tightrope, is a staple on the Dublin improv scene. When Rick Doody invited me to be part of the team behind it during the dawning of Tightrope with Jessamyn Fairfield, I was somewhat hesitant. I’m weary of committees as I haven’t had good experiences. As the saying goes, a camel is a horse designed by committee. (That’s why Improv Fest Ireland is not run by committee.) However I had great fate and respect in both Jessamyn and Rick so I signed up. The Tightrope team (I refuse to say committee) has grown as Tightrope was grown and thankfully its a team of great people. As such Tightrope is expanding to 2 nights in 2017. This is a big step forward for improv in Dublin. Audience numbers are growing. More and more people want to do improv and there is now more people pulling in the right direction to make things happen for the betterment of our art form. There are exciting things ahead!

And all the other bits!

These are just some of the highlights of my year. I’ve also just completed the first of 3 steps in a Masters in Training and Education with a view of bringing an academic background to improv as a skill to be used beyond the performing world. It eats away at my free time.

I also launched a podcast series inventively called “Neil+1 The Podcast” which you can read more about here. The podcast features interviews with some of the inspiring and interesting improvisers I meet on my travels. I like to think it as a podcast for the Improviser’s improviser.

But like everything in life, there is a finite amount of resources and time is the biggest one for me. I can’t do everything. When December came round, I was delighted to take a much earned break from any formal improv goings on. If 2015 has taught me anything, its that you have to takes breaks from the things you love, even if you are passionate about it. Burnout is a real risk.

I’m extremely grateful for the friends and family who support my endeavours and keep me sane through it all. And also to the people in the improv community who continue to strive to make our art form inclusive and community focused. Thank you all.

I realise these Year in Review posts are somewhat self indulgent. However if you have read this far, I encourage you to do something similar if you have something you’re passionate about be it improv or otherwise. Document your journey on that path. These posts in future years will serve as a time capsule for me to look back over the things I did and the things I learned from. Social media is alive with the talk of all of the celebrities and icons we lost in 2016. As tragic as it is in many cases, it highlights how even the iconic, powerful, rich and famous are not invincible. Make the most of the time you have, ‘yes and’ life and call your Granny from time to time.

Connect With Me Online